St. Bonaventure said, “Into thy hands, O Lady, I commend my spirit.” Thus he served the creature more than the Creator, to whom alone all such words should be addressed.

St. Bonaventure did not serve the creature more than the Creator. In commending his soul to Mary he was not commending it to anyone opposed to God. He did it because of God, who chose Mary as the second Eve. Eve brought us forth to misery and to death; Mary brought us forth to happiness and to life when she brought forth our Saviour. Like the kings from the East, St. Bonaventure knew that after the long journey through this life, he would also find the child Jesus with Mary His mother and that if he commended his soul to the mother he would necessarily find himself in the presence of the child, even in eternity. Gladly on my own deathbed would I utter the words used by St. Bonaventure. As Jesus came to us through Mary, so we should go to Him through her, whether we think of it or not.

Mary is no different from your own mother.

As the street-arab replied to a similar objection, “But there’s an immense difference between the sons. My mother is the mother of me. Mary is the mother God.”

You speak as if Jesus looks on His mother just as you look on your mother.

Jesus was a good son, but He recognized only one being, the Omnipotent God.

Had He ignored Mary He would not have been a very good son, nor would have had much respect for God who said, “Honor thy father and thy mother.” Christ was a perfect example of virtue in all things. And if He did not recognize Mary, why did He go down to Nazareth and be subject to her? Why did He perform His first miracle at her request? And why did He make such special provision for her at the moment of His death?

When someone praised Mary, Christ paid no attention, but said that only those are blessed who keep the word of God. Lk. X1., 28.

The Gospels are fragmentary accounts, and we do not know all that transpired on that occasion. But even so, the actual text is not opposed in any way to the honor we give to Mary. Someone praised Mary. Christ replied, “Yea rather, blessed are they who hear the word of God and keep it.” Not for a moment did He intend to deny that Mary had done this. He practically says, “Yes. She is blest in being my mother. But it is a greater blessing to serve God.” And, from one point of view, the fidelity with which Mary undoubtedly served God was a greater blessing to her than merely being the mother of Christ. Any idea that Christ, the best of sons, was trying to belittle His mother is absurd. And if you have such faith in Scripture, what do you do as regards the prophecy of Mary in Lk. 1, 48? “From henceforth,” she predicted, “all generations shall call me blessed.” Yet blessed are they who hear the word of God and keep it! We Catholics call Mary blessed indeed, whilst many Protestants search Scripture in the fond hope of proving something to her discredit!

Christ called her, “Woman,” when He said, “Woman, behold thy son.”

In the language Christ spoke, that word was a term of great respect however harshly it may sound in our modern English language. Our Lord would have been the last to slight His mother, a thing we despise in every man; and above all in His last and most tender words to her. Nor are we likely to please Him by seeking to dishonor her.

Did He not say to her at the marriage feast of Cana, “Woman, what is that to thee and to me?

He did. But most certainly He intended no reproach to Mary. Her action was one of pure charity to others. Foreseeing the possible distress of others, she asked Him to relieve them; and He would not rebuke so unselfish a thought. Nor would He speak to her with any trace of disrespect. Then, too, had Mary asked a wrong thing, Christ would not have done it, nor would He have sanctioned a request He had to rebuke. And Mary knew that she had not been reprehended, or she would not have told the waiters to do what her Son would tell them. She would have dropped the matter. Why, then, did Christ speak thus? It was His first miracle, the first public sign of His divinity wrought by Himself. And He wanted to bring out publicly the fact that He was doing it, not as the son of an earthly mother and according to His human nature, but calling upon His divine nature as the eternal Son of God. He did it because His mother requested it, but He did not do it by any power derived from His mother. He thus brought out both for the listeners and for us that this beginning of miracles was proof of His divinity, although in appearance He seemed but man.

Why do you call Mary Queen of Heaven?

Because Mary is undoubtedly in heaven, and Jesus is King of heaven. Since Jesus is “King of kings and Lord of lords,” it is certain that Mary His mother rejoices in queenly dignity.

Why pray to Mary at all?

Because God wills that we should do so, and because such prayers to her are of the utmost value. God often wills to give certain favors only on condition that we go to some secondary agent. Sodom was to be spared through the intercession of Abraham; Naaman, the leper, was to be cured only through the waters of the Jordan. Now Mary is, and must ever remain, the mother of Christ. She still has a mother’s rights and privileges, and is able to obtain for us many graces. But let us view things reasonably. If I desire to pray, I can certainly pray to God directly. Yet would you blame me if, at times, I were to ask my own earthly mother to pray for me also? Such a request is really a prayer to her that she may intercede for me with God. Certainly, if I met the mother of Christ on earth, I would ask her to pray for me, and she would do so. And in her more perfect state with Christ in heaven she is not less able to help me.

Not necessarily. It might well be that God intends to honor Our Lady by granting the favor I seek through her intercession in a particular way. In that case the grace is to be given through her provided I honor her by addressing myself to her. Again, every prayer to Mary is in reality the asking of a favor from God even as the mother of Christ is requested to ask the same favor also. It is often better to ask God for a favor and to have someone else praying to God with one for the same favor. Two prayers are better than one. And above all, when the other one praying is Christ’s own mother.

God loves you more than Mary loves you.

That is so. But He loves Mary more than He loves me. And as she is more pleasing to God than I am, He will be more ready to grant her requests.

It is unscriptural to attribute power to Mary.

That is a very unscriptural statement. At His mother’s request Jesus changed water into wine at Cana, though He had said, “My time is not yet come.” St. James tells us that “the prayer of a just man availeth much.” Ja. V., 16. How much more the prayer of Mary!

Does the Bible sanction such prayers to Mary?

Yes. All through the Bible you will find God conferring favors through the prayers of others. In the Old Testament we read of the prayers of Abraham, Moses, and of the various prophets. In the New Testament, St. James tells us to “pray for one another,” in the text I have just quoted. If we must always pray directly to God and may not ask the prayers of others, why did St. Paul write to the Thessalonians, “Pray for us that we may be delivered from importunate and evil men?” 2 Thess. III., 2. Why did he not ask that directly of God, instead of asking the prayers of the Thessalonians? Or would you be more scriptural than the New Testament itself?

There is but one mediator; there is no place for Mary.

Christ is the principal mediator in His own right. Mary is a secondary mediatrix, through, with, and in Christ. Without Him she would have no power, and therefore He is the source of all mediation with God on behalf of men.

How can you blend the mediation of others with that of Christ?

It follows from the doctrine of the Communion of Saints. Remember that, by Baptism, every Christian is incorporated with Christ. St. Paul says, “Christ is the head; ye are the members.” So close is this union that Christ says, “Whoever gives you to drink a cup of water in my name, because you belong to me; amen, I say to you, he shall not lose his reward.” Mk. IX., 40. Every Christian is Christ in a most intimate way. St. Paul tells us that if a baptized person sins, he takes the members of Christ and makes them the members of iniquity! When that same St. Paul was persecuting the Christians before his conversion, Christ appeared to him and said, “Saul, Saul, why persecutest Thou Me?” He did not say, “Why persecutest thou My disciples?” He could equally say, when we pray to Mary or to the saints, “What asketh thou of Me?” When we honor Our Lady or the Saints, we honor, not their own merely human and created nature, but we honor Christ in them according to the doctrine of Scripture. The Catholic Church is the only completely scriptural Church.

Do Catholics believe that Mary is omnipotent?

No. God alone is omnipotent. But through Mary we have access to the omnipotence of God.

How do you know that Mary hears you?

The Catholic Church guarantees that, and she is here to tell us the truth about such things in the name of Christ and with His authority. Reason also assures us that, as she could know our prayers in this life and pray for us in turn, so she can do so in the more perfect state in heaven. Finally experience proves it, for she has manifested her power in thousands of concrete instances in answer to prayer.

The Catholic Answers gives you answers to all your Catholic related questions. 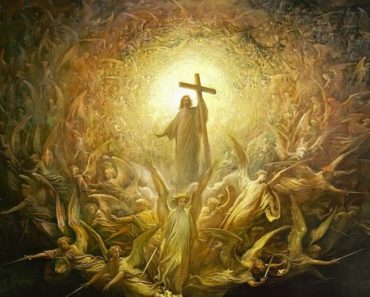